The number of people killed in violent protests against rising living costs in Chile has risen to 11, Santiago Governor Karla Rubilar said on Monday.

At least five of those killed died after looters torched a garment factory near the capital.

The military and police used tear gas and water cannon against protesters and a curfew was imposed in major cities.

A state of emergency already in place in Santiago is to be extended to cities in the country's north and south.

The unrest, sparked by a now suspended metro fare hike, has widened to reflect anger over living costs and inequality.

Ahead of major disruption expected on Monday, Chile's President Sebastián Piñera said the country was "at war" with a violent enemy.

But the head of national security, Gen Javier Iturriaga, played down such talk.

After taking a helicopter flight over the city to assess the situation, he told journalists on Monday morning he was satisfied with the situation.

What is happening on the ground?

Firefighters say they found five bodies inside the garment factory burned by rioters in a suburb of Santiago. Three more people are also reported to have died on Sunday although no details have so far been given about the circumstances of their deaths.

Earlier reports suggested three people had died in a supermarket fire in Santiago on Saturday, bringing the total of people killed since the protests started to 11. 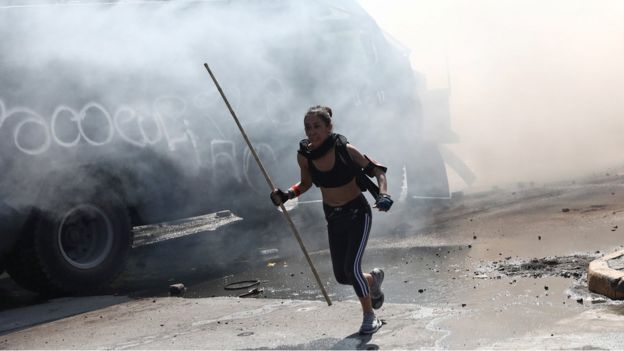 There had been 70 "serious incidents of violence", including 40 lootings of supermarkets and other businesses. Two people also suffered gunshot wounds after a clash with police, officials say.

"We're facing a real escalation that is undoubtedly organised to cause serious damage to our country and the lives of each of its citizens," Interior Minister Andrés Chadwick said.

Some 10,500 police and soldiers have been deployed to the streets, he added, while officials report more than 1,400 arrests.

In several cities on Sunday, protesters set more buses on fire, smashed up metro stations and clashed with riot police. A night-time curfew was imposed in the areas of Santiago, Valparaíso, Coquimbo and Biobío. 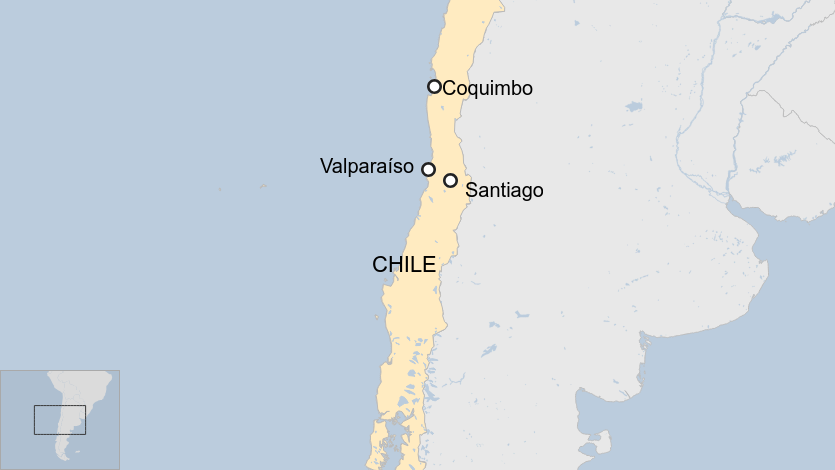 A state of emergency will be applied to Antofagasta, Valparaíso, Valdivia, Chillán, Talca, Temuco and Punta Arenas, allowing authorities to restrict people's freedom of movement and their right to assembly.

In Santiago, almost all public transport was suspended and some flights at the international airport were cancelled or rescheduled because of insufficient crew.

At least one line of the city's metro was expected to reopen on Monday after the entire system was closed on Friday because of damage. 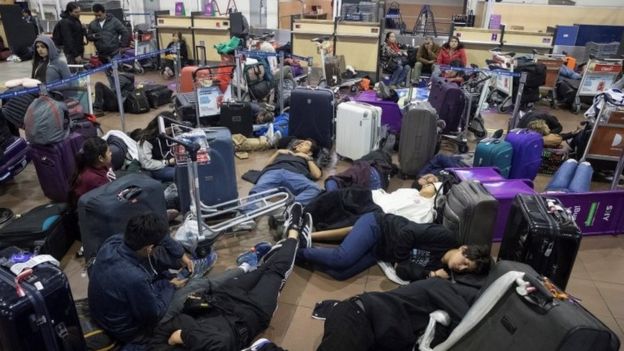 What does the president say?

Mr Piñera, a billionaire conservative, has been criticised for his response to the protests, the most severe crisis of his current term.

In a TV speech, he said people who were causing fires, setting up barricades and looting were "criminals".

We're very aware that [those behind the riots] have a degree of organization, logistics, typical of a criminal organization," he said. "I call on all my compatriots to unite in this battle against violence and delinquency." 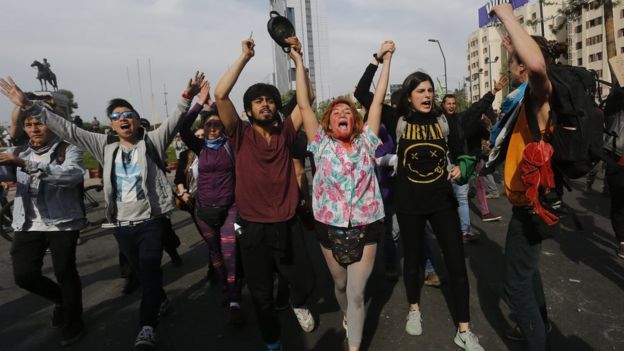 Mr Piñera - who took office in March 2018 after having served as president between 2010 and 2014 - has deployed soldiers and tanks for the first time since 1990, when Chile returned to democracy after the dictatorship of Augusto Pinochet.

"We're at war against a powerful and implacable enemy who doesn't respect anything or anyone, and who's willing to use limitless violence and criminal acts." That is how President Piñera described the protests late on Sunday.

While some of the footage of violent clashes between the security forces and protesters do resemble those coming out of a war zone, other reaction to Mr Piñera's description has been scathing with opposition politicians calling it "pathetic" and "irresponsible".

But more important is the effect those words have had on the protesters. If they already felt ignored by the government, President Piñera labelling them as criminals in their eyes proves how little he cares about their concerns.

With the protest movement gaining momentum while still lacking clear leaders and Mr Piñera's language further stoking the flames, the chance of any meaningful dialogue seems to slip further away.

What is the background?

The unrest has exposed divisions in the nation, one of the region's wealthiest but also one of its most unequal, and intensified calls for economic reforms.

It follows simmering discontent in some of the country's universities and schools over lack of resources and underfunding.

Protester Constanza Gonzalez told the BBC: "This isn't about political parties. I think people are angry and this was a thing that had been coming for quite a long time."

Mr Piñera suspended the rise in the Santiago metro fare on Saturday, saying he had listened "with humility" to "the voice of my compatriots".