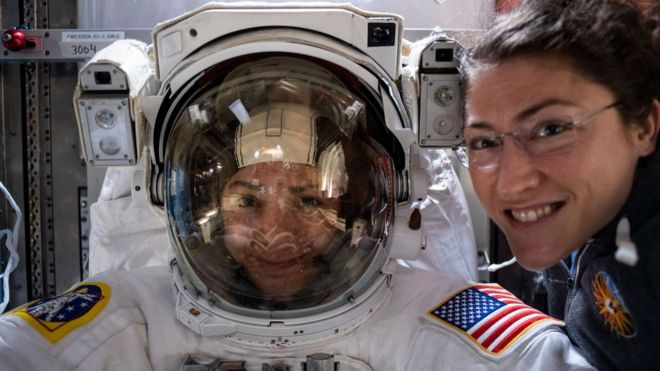 Image copyright: NASA
Image caption: The astronauts getting suited up for the spacewalk

The astronauts will have to venture to one end of the ISS. Once there, they will then spend five-and-a-half hours replacing the power regulator with a spare.

There have been 13 female spacewalkers, including Koch.

She has already carried out two extra-vehicular activities (EVAs) at the space station this year. Jessica Meir becomes the 14th. 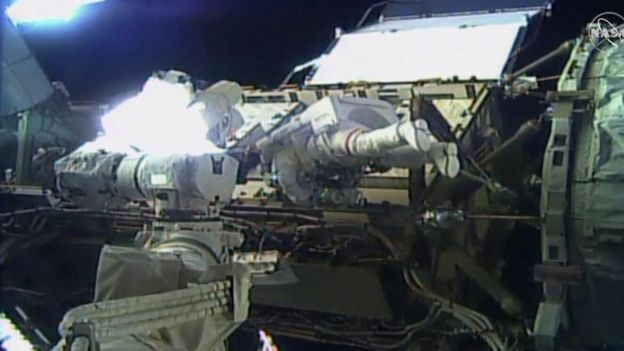 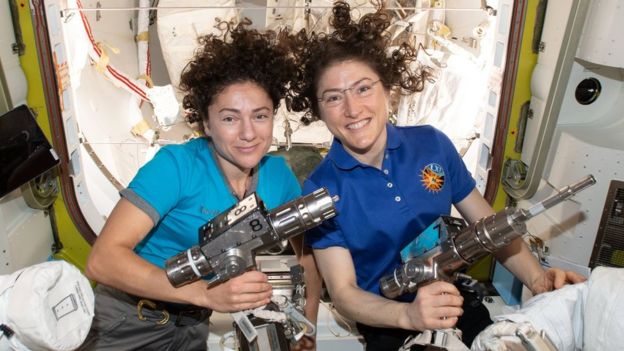 They are making their way to a location called the Port 6 truss structure. Once here, they will have to replace the device, known as a battery charge-discharge unit (BCDU).

Once this task is complete, Koch and Meir will return to the airlock with the failed BCDU. The device will subsequently be loaded on to the next SpaceX Dragon resupply ship for inspection on Earth.

In March this year, Nasa announced that Koch would take part in the first all-female EVA with colleague Anne McClain. 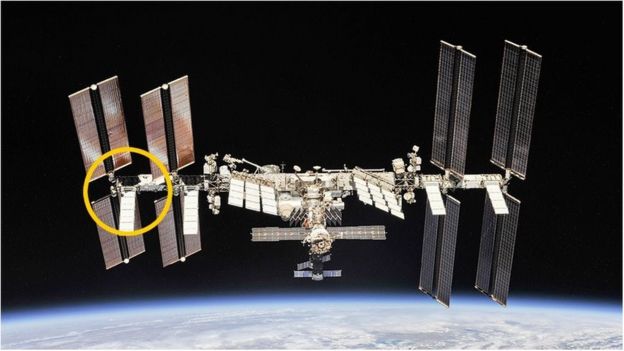 Image copyright: NASA
Image caption: The Port 6 truss structure is at one end of the ISS

However, the spacewalk was called off because a medium-sized suit wasn't available in the near-term for McClain.

The first woman to spacewalk was the Russian Svetlana Savitskaya, who went outside the USSR's Salyut 7 space station for three hours, 35 minutes on 25 July 1984. She was accompanied by fellow cosmonaut Vladimir Dzhanibekov.

The first person in history to spacewalk was Soviet cosmonaut Alexei Leonov, who died earlier this month aged 85.

On Tuesday, Nasa unveiled the prototype for a new spacesuit that could be worn by the next astronauts on the Moon.

It said the new Moon suit, known formally as the Exploration Extravehicular Mobility Unit (xEMU), is designed to give the wearer a customised fit whatever their shape or size.